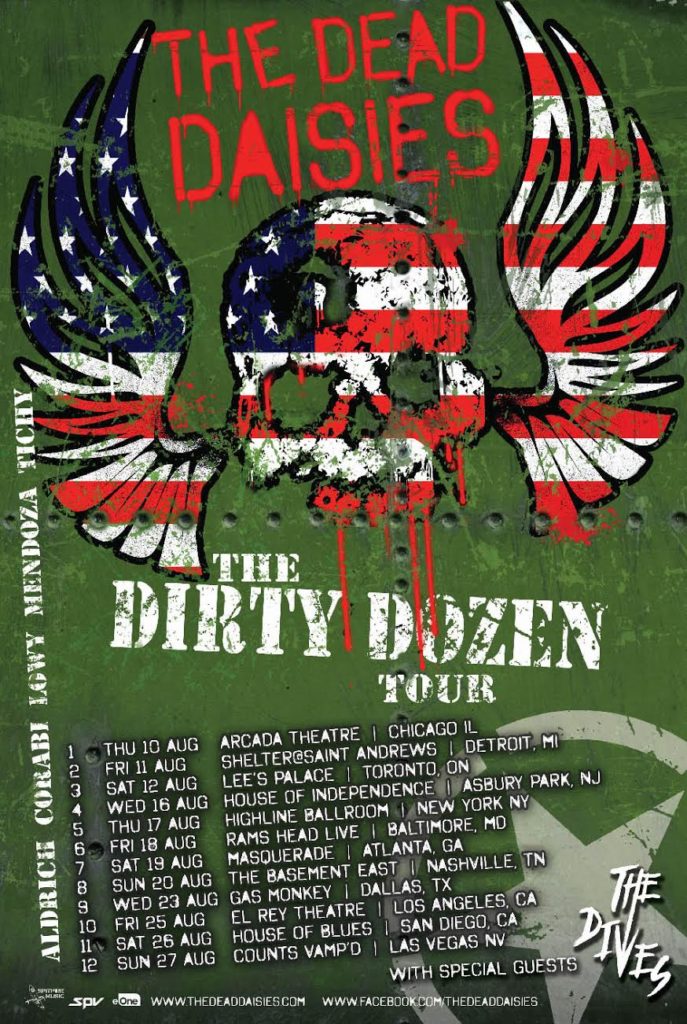 THE DEAD DAISIES’ awesome live juggernaut is set to storm into North America in August for a dozen prime live dates as part of their Live & Louder World Tour, in support of the release of their landmark ‘Live And Louder’ album on Spitfire Music/SPV/eOne on May 19th. Heralded “The Dirty Dozen Tour”, the trek is set to kick off in Chicago, IL on August 10th and will wrap in Las Vegas, NV on August 27th.
“The Dirty Dozen Tour” is inspired by the classic 1960s movie of the same name. “Rehearse them, Excite them, Arm them – then turn them loose on the Fans!”
It will be the band’s first North American Headline Tour where demand has been steadily building after 2016’s smash success of their third album “Make Some Noise”.
Lead singer John Corabi – “We’re all very excited for our very first North American headline run. We’re kicking it all off on August 10th in Chicago and ending it in “Sin City” Las Vegas!!! You guys have been amazing with all of your support and requests for shows here, so we’re giving it to you “LIVE AND LOUDER”, and “down and dirty” on “The Dirty Dozen Tour 2017”!!!! See ya on the road kids!!!”
Before being turned loose on North American audiences, the troops will be fresh from playing some of the most prestigious & high profile UK & EU Rock Festivals coupled with a series of headline club shows, dates in Japan to then make their long-awaited debut in South America. From South America it’s back to one of the EU’s largest Festivals “Woodstock Poland”, to be part of a “Concert Inspired by Freedom” which will see the band perform with a 60-piece Orchestra.
”LIVE & LOUDER”, will be available in multiple deluxe formats & perfectly captures the awesome vibe of their supreme, sweat drenched, roof-raising live sets, recorded on a heady high at the end of an unbelievable 2016. The result, once again mixed by Anthony Focx (Aerosmith, Bad Company), is an absolute stunner!
Lead guitarist Doug Aldrich has some choice words about the upcoming live album – “Live & Louder really helps define The Dead Daisies’ sound. Like bands I’ve been involved with co-producing (Whitesnake and Dio), we have a great team that makes sure our sound is consistent and we are always looking to pump it up. Onstage I just play guitar but our crew and production team are very instrumental in capturing what happens on stage. Now get out there and go Live & Louder with us this summer!!”
Special Guests on this run will be THE DIVES which the band made instant friends with on the previous years’ KISS Kruise and who will add their own blend of signature rock and roll to the fiery package.
Rock & Roll is indeed alive and well!!!
Check out the “Make Some Noise – Live & Louder” video here: http://bit.ly/2mcS4ft
LINE-UP:
Doug Aldrich (Whitesnake, Dio) –  Guitars
John Corabi (Mötley Crüe, The Scream) – Vocals
David Lowy (Red Phoenix, Mink) – Guitars
Marco Mendoza (Thin Lizzy, Whitesnake) –  Bass
Brian Tichy (Ozzy Osbourne, Foreigner) –  Drums
THE DIRTY DOZEN TOUR – NORTH AMERICA 2017:
Thu 10 Aug Arcada Theatre | Chicago IL
Fri 11 Aug Shelter@Saint Andrews | Detroit, MI
Sat 12 Aug Lee’s Palace | Toronto, ON
Wed 16 Aug House Of Independence | Asbury Park, NJ
Thu 17 Aug Highline Ballroom | New York NY
Fri 18 Aug Rams Head Live | Baltimore, MD
Sat 19 Aug Masquerade | Atlanta, GA
Sun 20 Aug The Basement East | Nashville, TN
Wed 23 Aug Gas Monkey | Dallas, TX
Fri 25 Aug El Rey Theatre | Los Angeles, CA
Sat 26 Aug House of Blues | San Diego, CA
Sun 27 Aug Counts Vamp’d | Las Vegas NV
Tickets: www.thedeaddaisies.com/thedirtydozen
General on-sale April 14, 2017