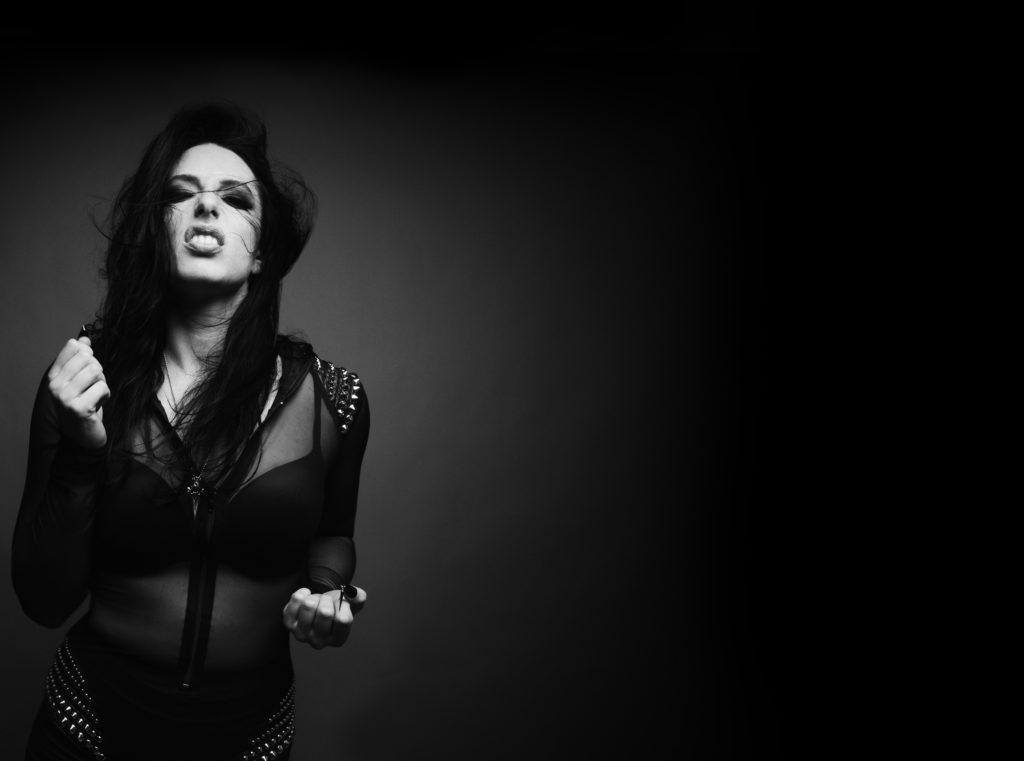 Undoubtedly one of the top hard rock tours of the springtime will be the teaming of Sevendust and Madame Mayhem on a trek throughout the U.S. – beginning on April 21 in El Paso, TX, and wrapping up on June 1 in Sioux City, IA (with more dates coming soon). A true rocker with an eclectic style in every aspect of life, Madame Mayhem merges theatricality with hard-hitting, rocking tunes. And paired with Sevendust, this bill will certainly be one hot ticket.
“Really excited to get back on the road and play!,” says Mayhem. “This tour is going to be so much fun. The band and I are thrilled to be supporting SEVENDUST on this run, those guys are like family to us. For this U.S. run, we will be supporting SEVENDUST on their tour,  as well as playing some headlining shows of our own in between. These will be shows you will not want to miss. Can’t wait to get on stages and rock out with the crowds, while continuing to spread the music from our newest album, ‘Ready For Me,’ to the masses.”
Mayhem’s new killer music video, for the track “War You Started,” was recently unveiled – serving as just one of the many standout rockers from her latest album, ‘Ready for Me’ (issued via Metalville label in the UK and Europe, and HeadBall Records in the US), “War You Started” certainly passes the test in concert, as the singer explains, “’War You Started’ is the first track on the album, ‘Ready For Me.’ It’s also one of my favorites to kick off our sets with since it’s hard hitting, high energy, and gets not only the crowd moving, but us moving and excited as well.”
Written by Madame Mayhem, Corey Lowery (who also produced the album), and Clint Lowery (Sevendust), the video stands apart from previous videos. “The ‘War You Started’ music video is different from my others. It’s the first music video I have shot with my touring band. We had so much fun during the video shoot. We actually made the video in Atlanta right between our US and UK/European tours. The music video was directed and edited by guitarist Gogi Randhawa. It was cool to have a band member direct and be in the video at the same time. I am so happy with how it came out and thrilled that viewers can see the energy myself and the band put into performing.” The clip can be viewed in all its explosive glory via this link: https://youtu.be/6p9Ba1YCe54
The singer has performed across the United States to packed rooms, including B.B. King Blues Club, The Roxy, The Viper Room, Bowery Ballroom, Knitting Factory, a residency at The Cutting Room, the Bluebird Café during Grammy nomination week, Shiprocked Cruise 2017 and 2018, Sunfest 2017, Sturgis Buffalo Chip 2017, and has performed on national tours with renowned and respected artists such as Doro, Mushroomhead, and just completed extensive tour of Europe with Fozzy.
Madame Mayhem has been covered in both fashion and rock music media worldwide, which includes feature coverage in Aquarian Weekly, Brave Words, Fashion Style, Gannett, Guitar World, KNAC, Loudwire (her music videos have been top 10 for multiple weeks), New Noise, Revolver, The Day In Rock, listed in ROCKwell UnScene Magazine’s top 5 Best Female Vocalists of 2016, and more. Additionally, she made most added on the CMJ Loud Radio Charts with over 60 stations nationally in the United States. Also, she has been mentioned in Modern Drummer and is on the latest cover of Black Velvet Magazine.
Soon, lucky U.S. fans will get the opportunity to experience Madame Mayhem on a nearby concert stage – with Sevendust!
CONFIRMED TOUR DATES:
April 21 –  El Paso, TX – Speaking Rock
April 22 –  Albuquerque, NM – Sunshine Theater
April 24 –  Austin, TX – Come and Take It Live
April 25 –  Baton Rouge, LA – Varsity Theater
May 1 –    Destin, FL – Club LA
May 2 –    Nashville, TN – Cannery Ballroom
May 6 –    Lancaster, PA – Chameleon Club
May 8 –    Portland, ME – Aura
May 9 –    Clifton Park, NY – Upstate Concert Hall
May 11 –  Royal Oak, MI – Royal Oak Music Hall
May 12 – Rock on The River Festival
May 13 –  Mentor on the Lake, OH – Music Lynxx **
May 18 –  Sturgis, MI – Nikki’s **
May 19 –  Joliet, IL – The Forge
May 20 –  Belvedere, IL (Rockford) – The Apollo Theater
May 22 –  Denver, CO – The Oriental Theater
May 23 –  Colorado Springs, CO – Black Sheep
May 24 –  Merriam KS – Aftershock **
May 25 –  St. Louis, MO – The Firebird  **
May 26 –  Memphis, TN – New Daisy Theater
May 27 –  Knoxville, TN – The International
May 29 –  Lexington, KY – Manchester Music Hall
May 31 –  Muncie, IN – Big Shots**
June 1 –   Sioux City, IA – Hard Rock Hotel & Casino
** Madame Mayhem Headliner
All other dates Madame Mayhem opening for Sevendust