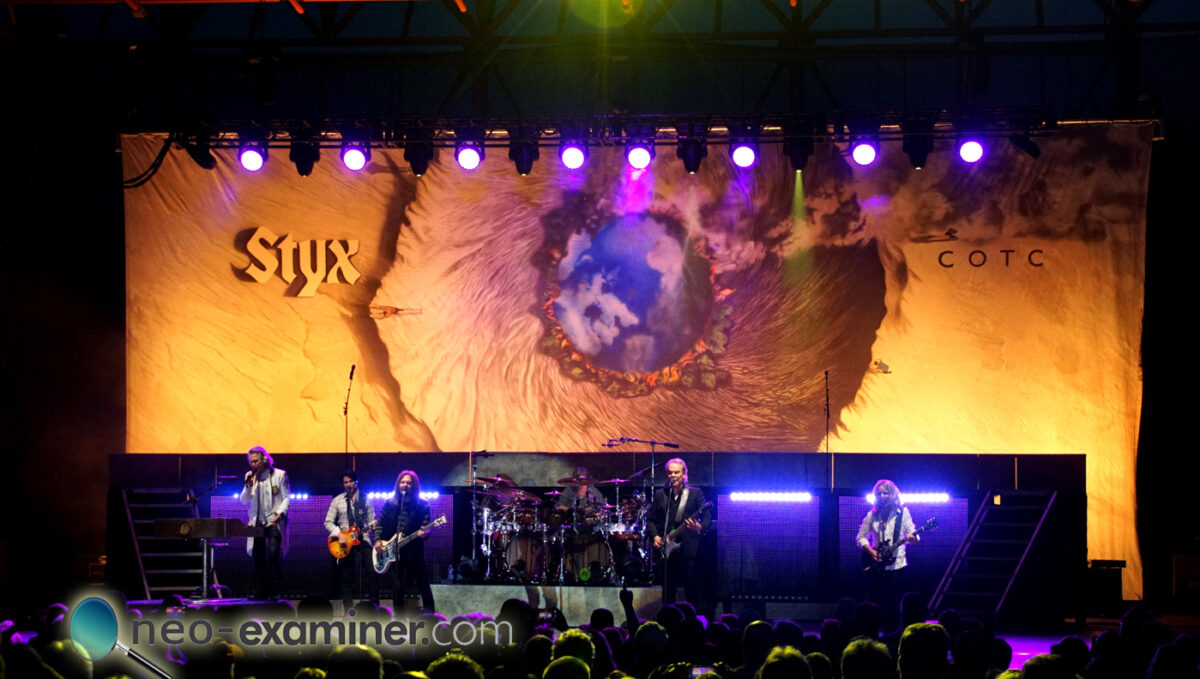 Youngstown, Ohio- The mega hit and legendary Styx came to the rust belt this last week and to say they rocked the house is an understatement of gargantuan proportions. They gave the public the prescription for rock music that everyone needed and the near capacity crowd could not have been happier .The band is fresh off the release of their new studio album ” Crash of The Crown ” and showcased several of the tracks during their set along with beloved classics .

The evening started with ” The Fight of Our Lives ” and was the perfect introduction to Styx in 2021 especially with the tag line ” We Will Not Give In ” .The band, the crowd and the staff all agreed it was time to live life again !

The set then went into a mega hit set including ” Blue Collar Man “, “Grand Illusion “, and ” Lady ” . Just to name a few . Some of the new songs premiered were ” Reveries ” a beautiful song with several unique changes and the Styx signature harmonies and melodies including some great duel guitar work .

Another great track played was ” Sound The Alarm ” and includes Tommy Shaw’s thought provoking lyrics and vocalization and is a chilling song with a great message . The title track of ” Crash of The Crown ” went over huge with the crowd as it seemed almost like a standing ovation for ” JY ” and the rest of the band !

The rest of the set included some of the Styx staples such as ” Come Sail Away “, ” Fooling Yourself ” and ” Too Much Time ” . The encores blew the roof off of the place when ” Mr. Roboto ” and ” Renegade ” of which the crowd was deafening .The band playing tonight was Tommy Shaw, James Young,Ricky Phillips,Lawrence Gowan, Todd Sucherman and Will Evankovich .Not to missed was the Styx charity ” Rock To The Rescue ” for which they raffle off a signed guitar and proceeds go the a local charity and this time is was the local Amvets .To find out all things Styx check out the official website at http://www.styxworld.com

The opening duties were filled by Donnie Iris formally of Wild Cherry and Donnie Iris and the Cruisers and he did a great job warming up the crowd . A lot if local luminaries were in attendance as well such as boxer Ray ” Boom, Boom ” Mancini who is a Youngstown native and three members of the Styx tribute band ” Best of Times ” if you need to your Styx fix between shows check out http://www.botstyxtribute.com/ and see they are playing a venue near you .

Until next time , check out the Grand Illusion and get your ticket for the show.