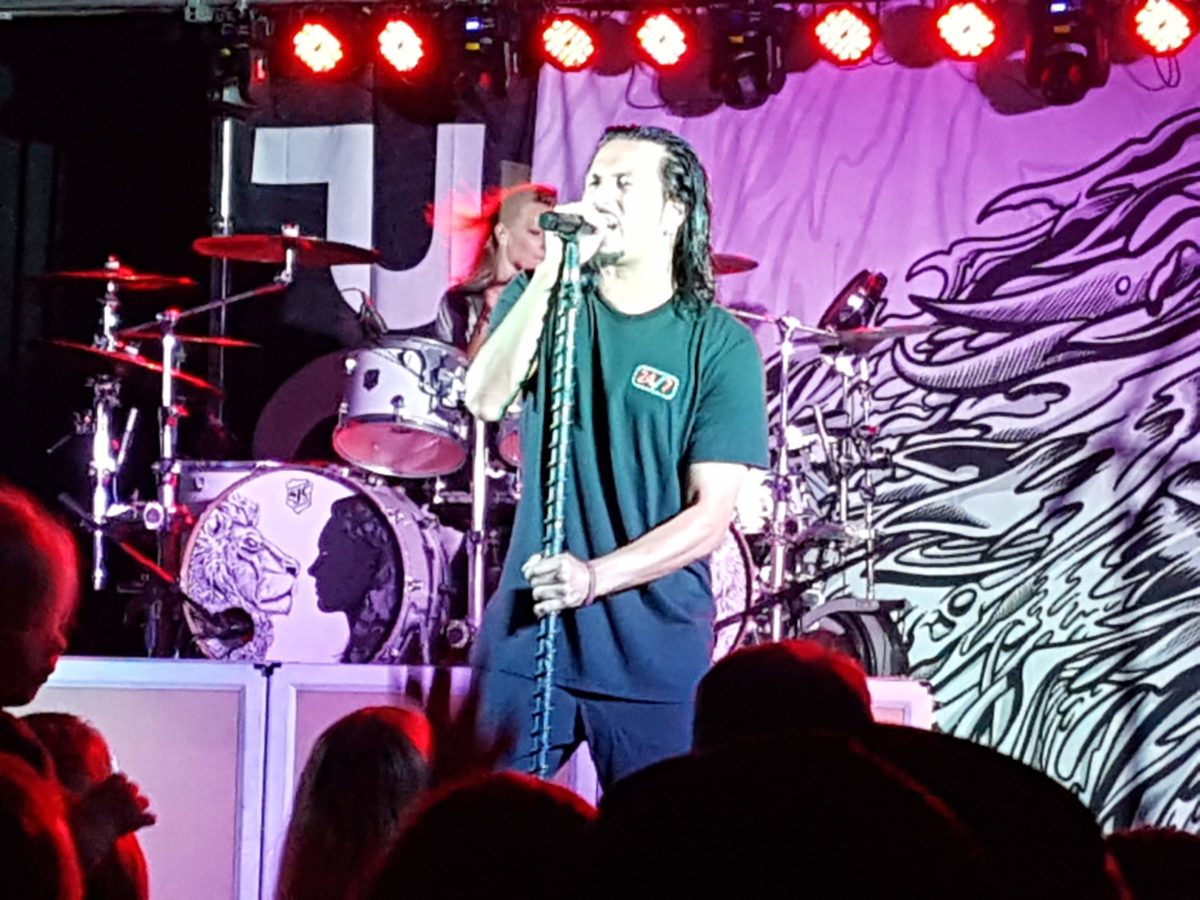 Watertown , NY-The air was thick with anticipation and heat from a summerlike day in Watertown, NY as a packed house at the Exhibition Hall was ready for an intimate early evening Sunday rock show headlined by POP Evil.  And the boys from Muskegon, Michigan (and lady from London) did not disappoint as they rocked a full 2 hour set with an energy that POP Evil have made a trademark of all their performances.

POP Evil played their full setlist of hits spanning over the last two decades and included a few special fan requests such as PURPLE from their War of Angels album and When We Were Young from their latest self-titled album.  Frontman Leigh Kakaty’s vocals were in full effect with Matt DiRito and Hayley Cramer’s pounding percussions keeping fists in the air.  Dave Grahs and Nick Fuelling rhythms kept the rock hungry crowd going.  Breaks between the songs were short and showcased the humility and gratitude that has earned POP Evil respect worldwide by thanking everyone for coming out and supporting Rock acknowledging that it’s music for the people and appreciating everyone for coming out.

Opening act Royal Tusk were perfect in setting the tone for the evening.  Riding high on the rock radio success of their first single AFTERMATH off their Royal Tusk II album, the band from Edmonton, Alberta Canada showed why they are considered one of today’s up-and-coming groups.  This was the second time they have toured with POP Evil, the first one being part of the Canadian leg of POP Evil’s tour in 2018.  With this exposure in the United States, Royal Tusk is a band sure to be heard by everyone soon enough.

Warming up the evening was BRKN Love, a young band from Toronto, Canada who have just released their first single Shot Down on Spotify.  With a sound blending classic 90’s alternative rock with modern day heavy riffs, this is a band soon to be heard on rock radio.

The well deserved success of a hard working band comes to fruition !

Cleveland, Ohio – The mighty Michigan hard rock act known at Pop Evil descended upon Cleveland this last week to the delight of the Rock Capital .The continued climb up the charts over the years has cemented this band into the heart and minds of fans everywhere . I met fans from Pittsburgh,Columbus and Toledo. To say this band has a following is a grave understatement as the fans traveled from  far and wide and thru many age groups from teens to middle aged, there is something for everyone.   The band is in current support of their self titled effort  ” POP EVIL ” with the song ” Waking Lions ” reaching number #1 on rock radio.

The evenings set started off with high energy and the track ” Ways To Get High ” and didn’t let up for sixteen songs . Some of my favorites were ” Torn To Pieces ”  and ” Bosses Daughter “.  I really like the new song ” Waking Lions ” as in this time in history it  can be applied to many situations. The guitar work of Nick Fuelling leads along with the solid rhythm guitar  of  Dave Grahs  made this is sonic attack on the senses.

The bands put the fans in to forefront and really plays to them , the onstage energy of bassist Matt DiRito really kept the crowd electrified. The personal contact of vocalist Leigh Kakaty along with the rich melodies and soulful lyrics cannot be put into words , suffice to say awesome ! The newest member of the group and keeping the beat and proving that some of the best guys in a band can be a woman is Hayley Cramer, drummer extraordinaire.

To learn more about Pop Evil or to see them on the upcoming summer tour check out the official website at   http://www.popevil.com